The British Shorthair is one of, if not the most popular cat breed. These cats have an amazing temperament, they are laid-back, adaptable, friendly and affectionate, devoted, loyal and good with other pets or children. They are very intelligent and can easily learn a few tricks. They are playful, and even more so as kittens. Sometimes their owner can even take them for a walk. You will also never see a grumpy British Shorthair.

Being in the presence of a beautiful, fluffy cat is neither overwhelming nor tiring. They are never obtrusive and try to keep a certain distance. British Shorthairs sometimes like to be alone and sometimes in the presence of others. They can become very attached to one person they choose and love them unconditionally. These cats rarely use their voice and when they do they want to communicate their need for things  like food, play time or scratching. They will often curl up with you for a cuddle, watch a movie with you or even sleep by your side. Sometimes they can even be dog-like and they will follow you around and mimic your movements.

They are perfect for big and small houses. British Shorthairs like to climb and even though they can live without this activity, they will love you forever if you construct a small mountain for them. It is worth remembering that these structures should be quite solid.

This cuddly, fluffy and lovable cat is like a beautiful rainbow. There are many colour varieties to choose from, for example golden, black, chocolate, lilac, blue, black, silver, red, cream and more.

Historians believe their origins most likely date back to the first centurywhen the Roman invasion brought Egyptian domestic cats to Great Britain. In those days cats played a very important role, they chased away rodents which were notorious for plundering the food supplies of Roman troops.

However, in the 1890s, newly imported Persians and other long-haired breeds became popular and the British Shorthair had fallen out of favor. By World War I they became critically rare, almost extinct. To prevent their disappearance, breeders mixed Persian into their bloodlines.

British Shorthair cats have strong shoulders, a broad chest and a straight back. They have strong legs with rounded paws and a medium-length tail that is rounded at the tip and thicker at the base. Their head is large and rounded, with broad cheeks, characteristic folds and large round eyes that are usually a beautiful, mesmerising, deep orange or blue. British Shorthair eyes vary in colour depending on the coat. Blue, copper or orange are typical for silver and blue cats, while blue-green or blue are typical for colourpoint cats. Their nose is straight and wide, relatively short, and their ears are small with rounded tips.
British Shorthair fur is dense and short and shouldn’t be sharp to the touch. 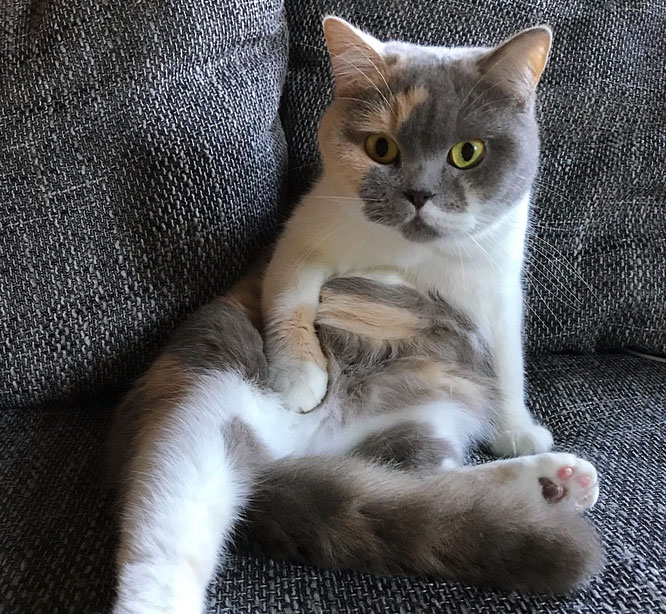